No matter the season, it’s almost not news anymore: Home values are getting higher and higher. New Home Sales, which measures signed contracts on new homes were up 4.8% in August, which was much stronger than was originally expected. Sales are now up 43% year over year. Housing continues to remain a bright spot in the economy. 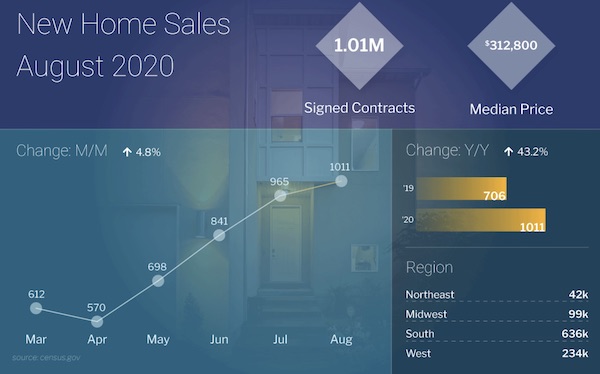 Of course, that’s not without its naysayers. There is still chatter of a housing bubble with several articles pointing out the high delinquency rate in the cities. However, as we noted in our last newsletter, more people are leaving the cities in search for more space, and so a snapshot of the weakest segment of the market can’t speak for the full picture.

In other positive housing news, the Mortgage Bankers Association also released their mortgage application data, showing that overall application volume was up 6.8% from the previous week. Similarly, the mortgage lender market has their fair share of naysayers who have indicated that the refi boom is over due to bottom out with many already refinancing. Yet, interest rates are still low – almost 1% lower than this time last year.

Overall, our beach days may be numbered, but the housing market is still hot, and it looks to be on track to stay that way into the Fall.

When is the Slowest Time for Home Sales?